What Are We Afraid of Learning?

BORACAY, PHILIPPIANS. This island paradise with its white sandy beaches, clear skies, and warm translucent turquoise seas is clogged with tourists from around the world, mostly Asians, followed by Europeans; but hardly any Americans. No problem communicating, English is the common denominator. A six-year old Chinese girl from Shanghai told me, as she got out of the water after snorkeling with her dad, “I saw one black fish and one white fish.” Her father smiled proudly, “She’s taking English lessons from a private tutor.” He went on to say, “My wife and I use our vacation time to travel the world. We’ve been to Cuba, South America, New Zealand, Egypt, Tanzania, and Greece. Next year we’re going to the States.” The encounter wasn’t unusual as I run into English speaking Chinese wherever I go. According to a recent survey, China, compared to all other countries, has the largest number (97 million in 2013) of outbound tourists. I can’t help but wonder how all these Chinese tourists, exposed to so many different cultures and political systems, won’t return home to transform China, taking the best and rejecting the worst of what they encounter. What is our excuse? We Americans speak English, the franca lingua of foreign travel, and per capita, we are a far richer country than China. Could the answer be that we are afraid of learning something about ourselves that we do not want to hear? On the same snorkeling cruise, a Philippian nurse asked me, “Are you a missionary?” To her obvious relief, I said, “No.” “Too often,” she said, “The Americans we encounter are those that think they have something to teach us.”
Posted by David Beck at 10:26 PM Links to this post

The Rich Get Richer and The Poor Poorer

BORACAY, PHILIPPIANS: Boracay is a pristine island paradise overrun with tourists from around the world. “It wasn’t like this ten to twenty years ago. You could walk down this beach and hardly see a soul. Now everyone is trying to cash in. There are no limits on the number sailing cruises, diving outfits, bars, restaurants, and hotels,” the man trying to sell me on a sailing cruise told me. “It’s difficult for a small operator like me to make a living. The big operators have ways of capturing the market that we do not.” I think of how my own itinerary was organized by a travel agency owned by Qantas. The agency in turn works with a broker who get volume cut rate deals from hotels, to transfers, to specific activities, whether that be a dive, a cruise, or a dinner show. This should translate into lower prices for the consumer, but I don’t think that’s the case, as each level of coordination takes its cut: Qantas gets theirs, the agency gets theirs, the broker gets theirs, and the owners of the specific activities get theirs. In the end the consumer ends up paying a premium and those working the activities get peanuts. It’s more and more difficult to beat the system as anyone offering services outside the system risks losing the business generated by that system. This in a nutshell is how the rich get richer and the poor poorer. At each level of transaction, far removed from the tuc tuc driver, hotel clerk, or tour guide are the capitalist dealmakers siphoning off the fruits of their labor.
Posted by David Beck at 10:25 PM Links to this post

MANILA, PHILIPPPIANS: Originally it was called a Jeep Knee because passenger knees would knock up against each other sitting on the cramped parallel benches in the back. It all started when after WWII the Philippians found they had no public transportation. Fortunately, the U.S. Army had left them their jeeps and with a bit of innovation they learned how to extend the chases allowing them to carry more passengers. Over time, however, they ran out of American jeeps and started importing used parts from Japan, but for some inexplicable adherence to tradition they kept the look of the American jeep. At the height of jeepney’s production there were five companies, employing over 300 each. Now there is only one, employing just forty-four. The reason for the industry’s demise, according to my guide, is that more and more of the jeepneys are now assembled by former employees in their own backyards. Taking just two months to assemble, a steel jeepney can fetch as much as $6,000, a stainless steel one over $12,000. In renting out a jeepney, an owner can net $20/day. At that rate, he can recover the cost of the material and assembly in a year. We visited the last standing jeepney factory. Since it was Sunday, there were only a handful of people milling around. Except for two ancient metal cutters, two rusted out bending machines, a half-dozen used engines heaped in a pile, and a dozen or so sheets of metal resting on a rack, the workspace, with its blackened and cluttered concrete floor, looked more like a small town blacksmith shop than an assembly plant. Yet without the jeepney — it’s hard to imagine — the Manila economy would come to a standstill. During a weekday up to a million Manila commuters might rely on the jeepney to get them to and from work.
Posted by David Beck at 10:23 PM Links to this post

MANILA, PHILIPPPIANS: A haircut in Manila costs $1. A good meal costs $10. To take the jeepkey (the most popular form of transportation) four kilometers you’ll have to pony up seventeen cents. Yet, even at these prices, it’s difficult for most Philippians to get by. Teachers make only $14/day and medical doctors gladly give up their practices for the opportunity to become nurses in America. The established minimum wage in Manila is just $11/day, outside Manila $7/day. But companies, apparently reluctant to pay even these low wages, routinely avoid paying the minimum wage at all by firing their employees before they complete their six-month probation. As a result, companies often pay no more than $4/day, which is equivalent to the subsistence level for a family of four. It’s no wonder you can see run-down shanties just about everywhere. The irony is that, at 90%, the Philippians has one of the highest literacy rates in Asia and as my guide assured me, “People here are happy.”
Posted by David Beck at 4:53 AM Links to this post

MANILA, PHILIPPIANS: I’ve learned never to rely on first impressions. The drive from the airport to my hotel on Makati Avenue in the City Center took two hours. I’m guessing I could have walked it in less time, but then walking is no breeze either. The area around the hotel, where my driver assured me is safe, is alive with people stumbling over each other; the streets and sidewalks are obstacle courses of misplaced signs, broken chunks of sidewalk, buckling pavement, food stands, garbage bags, beggars, hawkers, prostitutes, and vendors selling their wares, “Viagra, I make you a good deal.” — I guess they know their target market, white men over sixty. There are a few of those around as well. I stopped by an open food market where chicken intestines and pig stomachs appeared to be selling well. I ordered a bowl of spicy chicken and two scoops of rice. It was delicious. If people aren’t walking or clogging up the roads with their cars, they take a tuc tuc, a motorbike with an attached sidecar, or a jeepney, a stretched version of the jeeps the US Army left behind after WWII. At the hotel, you have half a dozen porters and doormen whose obsequious kowtowing can drive you crazy. “I’m okay. I can pull my bag myself. Please, no, no, I can do it myself. Thank you, it’s okay.” Lest I forget, security is also everywhere. There are security guards in front of every building, traffic cops at every intersection. There are cops in cars, and cops on motorbikes, and cops with sawed off shotguns. My driver was probably right. This is a safe area. I’ll see where these first impressions will take me.
Posted by David Beck at 8:32 PM Links to this post

From Under the Snow 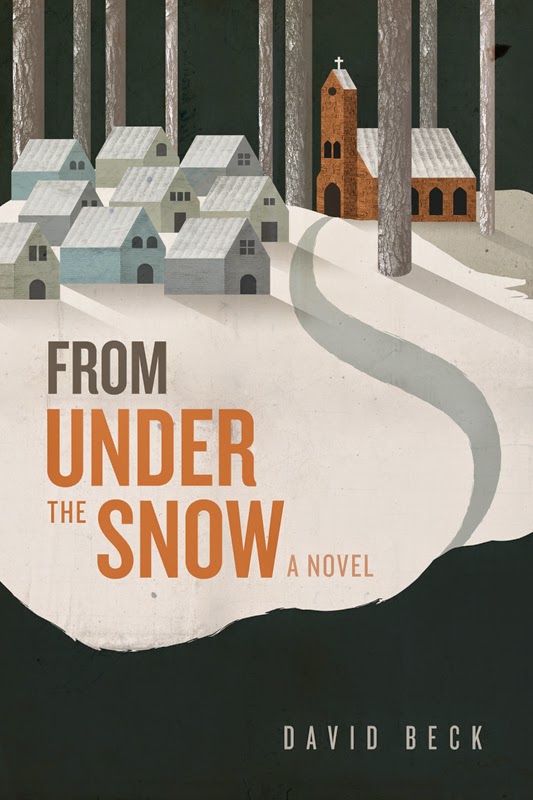 From Under the Snow is a novel about a young man's journey in coming to grips with life's uncertainties and puzzling conundrums in the early 60s. Jude, a seventeen year old boy, gets two free tickets to the Rose Bowl game between the University of Minnesota and UCLA and as a result thinks his small-town parochial life as a preacher’s kid is about to change for the better. Rather than being buried in the bleak Minnesota winter, Jude and his friend could be on their way to freedom in sunny California. But as they set out to hitchhike Route 66, Jude soon realizes they’ve embarked on more than a road trip. They encounter a series of trials that test their fortitude, beliefs, and ambitions; and Jude must rethink what really matters and whether the freedom he seeks is even possible. To purchase or read more click on the above hyperlink.